Hearing deficit in babies can impact speech and language development 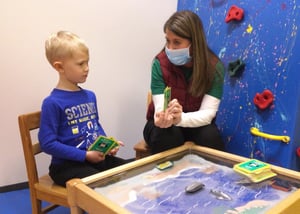 At 18 months, Riley Lamott was a bit of a late talker, but still within the normal range. At the time, his mom, Sarah, wasn’t too concerned. It wasn’t until Riley’s two-year wellness check that Sarah began learning that Riley was, in fact, dealing with mild hearing loss that was already impacting his speech and language development.

Children learn to speak by hearing in the first few years of life. They hear sounds modeled for them and, while they might not be speaking in sentences, they are learning how to form the sounds needed for fluent speech.

Riley’s hearing was first tested as a newborn in Ridgeview’s Birthing Center in Waconia. “All infants have their hearing screened here before being discharged,” explained Shelby Erickson, RN, manager of Ridgeview’s Birthing Center. “We perform a simple screening that tells us how the baby’s brain responds to sound. It allows us to send babies home with confidence that they’re beginning life with no hearing concerns, or if issues are identified, the newborn and family are referred for further testing.”

But sometimes problems can develop as an infant grows and matures.

Riley’s two-year wellness visit was pivotal in identifying his hearing loss. His pediatrician found fluid in both ears—a common occurrence for Riley, according to his mom—but never cause for concern because he never had ear infections.

His pediatrician referred Riley to John Meccia, MD, Otolaryngologist, (ENT/Ear, Nose and Throat specialist at Ridgeview), who confirmed the diagnosis of fluid behind the eardrums by performing a tympanogram test. He also noted enlarged tonsils and possible sleep apnea. Dr. Meccia arranged to have Riley’s tonsils removed and tubes placed at Children’s Minnesota because of his young age.

Following surgery, Riley's hearing significantly improved. For a year and a half, the tubes were working great, and as expected, they came out. Unfortunately, Riley experienced a series of ear infections, again seeming to compromise his hearing during those episodes.

Other options are considered before surgery.

Surgery isn’t always the first course of action when treating hearing deficits in children. If the deficit is caused by fluid in the middle ear, your doctor may prescribe medications, then recheck your child’s hearing a few times to determine if tubes are needed. Hearing impairment from other factors—such as a genetic cause—will follow a different course of treatment.

“It’s not uncommon for a child to experience temporary decreased hearing when fluid collects in the middle ear during or after a cold, but most often the fluid will reabsorb and the ear will clear,” Dr. Meccia explained. “In a small percentage of kids, because of problems with the Eustachian tube, fluid won’t want to clear and will remain in the ear, temporarily reducing hearing.”

That’s what happened to Riley. Even a small amount of fluid can impede a child’s ability to hear well and learn how to speak clearly.

In September 2019, when Riley was four years old, Sarah voiced concern about Riley’s speech to his pediatrician and Riley was referred to the Ridgeview’s Pediatric Rehab department to work with speech and language pathologist Lori Jaeger, MA, CCC-SLP. According to Jaeger, “It was evident that Riley’s speech delays were due to hearing loss because he was missing higher frequency sounds—such as s, th, sh, and ch. Since he started therapy, he has made significant improvements.”

Riley’s mom agrees. “Riley is so much easier to understand and talk with now,” she said. “Lori has been working with Riley on so much more than pronunciation of words. She has also taught him about the social etiquette of conversation. We are so appreciative of the progress Lori has made with Riley, and are thankful his speech delays were identified and corrected at an early age.”

Despite an early set back with speech and restrictions amid the COVID pandemic, Riley started Kindergarten this fall and is enjoying school with his new friends.

To help you track your child's speech and language development, follow these age-appropriate milestones:

*Provided by the National Institute on Deafness and Other Communication Disorders

If your child is not achieving these milestones, it’s important to discuss your concerns with his or her health care provider to determine if further investigation and intervention may be needed.