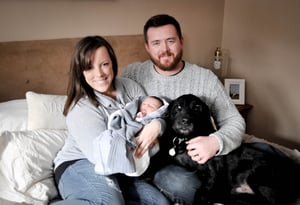 On a cold, Minnesota day in January 2019, Abie Rosckes and her husband Charlie were in the middle of a newborn photo session at their home in Delano. Feeling overjoyed with 10-day-old Dorothy, their first child, Abie didn’t think much when she noticed she was bleeding. “At first it was a small amout of blood, and I figured it was normal postpartum bleeding,” she explained.

Within seconds the bleeding intensified, and Abie passed out. Charlie immediately called 911. “I knew she needed help right away,” he said.

A Ridgeview ambulance was nearby and responded quickly.

Abie regained consciousness and remembers talking to the paramedics. “I asked them if I was going to die,” Abie recalled. “They were very reassuring and told me not to worry; they were going to help me.”

Charlie held Abie’s hand as they rode to the Norman and Ann Hoffmann Emergency Center on the Waconia Campus. “I was shaking,” Charlie said. “Abie was losing so much blood.”

The Emergency Department, ready and waiting to care for Abie, stepped into action as soon as she arrived.

“It was clear she was very sick, and her condition was very serious,” said on-call obstetrician Dr. Mohling, Western OBGYN. “She was pale with a high heart rate and low blood pressure.”

After performing a relatively easy procedure to remove the remaining placenta, Abie’s bleeding still did not stop.

In a time of anxiety and fear for Abie’s family, the staff at Ridgeview remained reassuring and comforting. “Everyone was so calm and was doing everything they could to help Abie,” Charlie recalled.

Dr. Mohling and the team went into the operating room and quickly identified the cause of Abie’s bleeding—a damaged blood vessel located in a precarious position in her uterus. Although they were able to stop the bleeding with a clamp, the blood vessel would not hold a permanent stich.

“In 23 years of doing obstetrics, I had never seen anything like that before,” Dr. Mohling remarked.

The medical professionals were left with two options to save Abie—perform a hysterectomy or transport her by air to Abbott where staff would destroy the blood vessel.

Dr. Mohling left Abie’s side for the first time in hours to talk to Charlie and the rest of her family gathered in the waiting room. Until then, Dr. Mohling hadn’t noticed the full-blown blizzard outside. Flying Abie was no longer an option.

“I explained to the family that we could transfer Abie to Abbott by ambulance and I would ride along to support and hold the clamp,” Dr. Mohling said. “However, if the clamp came off, there was probably no way I would be able to get it back on in the ambulance, which would be life-threatening.”

Abie’s family quickly came to a consensus; Dorothy needed her mom, and Charlie needed his wife. They directed Dr. Mohling to perform a hysterectomy. “Dr. Mohling was very confident this was going to save Abie,” Charlie explained.

When the procedure was over, Abie was in a serious but stable condition.

The next morning, Dr. Mohling went into Abie’s room to see how she was doing. “Abie could barely talk,” Dr. Mohling recounted. “But she thanked me for saving her life. Abie and I will always be linked, and I will never forget her.”

Abie feels extremely grateful for the entire Ridgeview team and for the care she received. “I owe my life to everyone at Ridgeview,” she said. “I get to be a mom to Dorothy because Ridgeview saved my life.”

This year, Ridgeview Foundation’s Lifeline for a Lifetime campaign will raise funds to purchase three new ambulances to deliver fast and effective emergency care to people like Abie.

The new ambulances will be equipped with emergency technology including a power load system for lifting patients, liquid suspension that allows for a smoother transport, and safety seats that enable paramedics to stay seated and buckled while administering care.

When experiencing a health care emergency, you and your family deserve exceptional ambulance services. Donate today and help Ridgeview ambulances continue to save lives!